A son of God 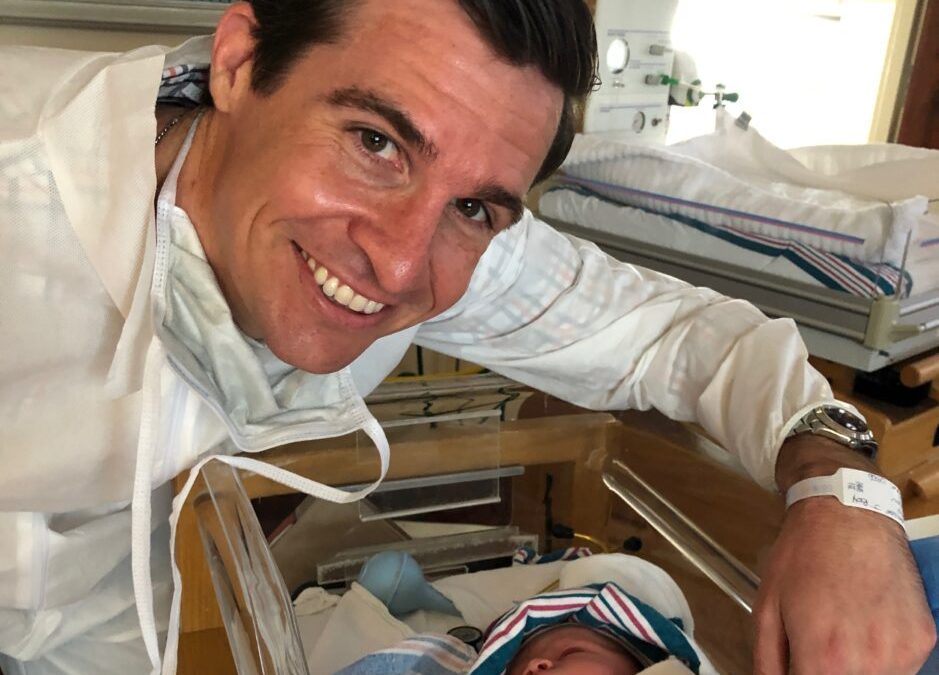 On May 30, God blessed my family with the addition of a baby boy. Luke Anthony Searcy was born at 8:06 a.m. and weighed 7 pounds, 2 ounces. To try to summarize or characterize the emotion of a new child is a task that is well beyond my ability, but I will say that one of the poignant senses you get when you see that brand new life for the first time is a sense of the divine hand at work. Even being our third child, when Luke first opened his eyes and clasped his hand around my pinkie finger, I knew that such a life could not come from me and my wife alone. In those first few hours, before the routine of changing diapers, sneaking hours of sleep, and constant feeding sets in, my wife and I could not help but feel the sense that somehow this child does not belong to us.

Of course, he doesn’t. More on that later.

Many of you know me or have read enough of my blogs to get a sense of what my interests are. A time like this makes me reflect upon the first time I became a father. That was almost four years ago, and it was a time when Christ worked miracles in my heart. I think the first of those was when, as a proud new father, I thought of what I hoped and dreamed my son would become.

Of course, my first thought was that he would star at the University of Virginia under Coach Tony Bennett and lead the Wahoos to a National Title. Thanks to this year’s team, it would not be their first! (it always comes back to the Hoos! lol) But then, I realized how difficult a task that would be and how unfair a pressure that would be to put on my son. After all, he could end up not liking basketball, or like me, he could end up loving it but not being good enough to play at such a high level, and if he could not, it was easy to conclude that my hopes and dreams for my son would not be shattered. If he were born with two left feet and hardly had the coordination to put one foot in front of the other (which is not the case, just a hypothetical), I would still love my son and anxiously await his future (which I still wouldn’t mind involving some time with Coach Bennett and the Wahoos).

So, if my hopes and dreams did not hinge on sports or athletic ability, then perhaps a job or a profession. Well, if I admit that I would be happy with my son not being a professional athlete, my limited imagination could not conjure many other professions I would find as exciting, being the sports nut that I am. So, I realized that whether he were to be a doctor, lawyer, engineer, architect, firefighter, custodian, or stay-at-home-dad, I would not love or think of him any differently. After all, at the end of the day, when we look back on our lives, while our work can give us a sense of pride, accomplishment, or even purpose, it is not what will matter to us when we are lying on our death beds. I know this very poignantly because four years ago I was spending every day sitting beside my mother as she lay on hers.

So, if it were not passions, interests, or a career that I dreamed my son would have, what was it? As I looked upon the peaceful face of my sleeping newborn son, what one wish would I make for him? What one thing could he do or be that would give him a sense of peace as he lay on his death bed and reflect upon his life?

This is where I come back to my son not really being mine. In the end, we all will learn who we belong to. As I watched my firstborn infant son lying on my dying mother’s chest day after day, I could see that from both sides of life’s spectrum. We come into this world belonging to God, and then we can choose whether or not we accept His grace into our hearts to truly become his sons and daughters. As I looked upon my son Tripp’s face then, and as I look upon his, Bennett’s, and Luke’s to this day, my wish for all of my boys is the same.

I pray that they live their lives as sons of God.

That truly is what matters and that is all that can fulfill any hope or dream worth having. When we are willing to see our lives as the flash in the bucket of eternity that they truly are, we will see that each day is a step in our journey toward eternity, and those steps can only go one of two ways: towards God or away from Him. It is only through His grace that we can ever have a relationship with our amazing Lord, Savior, Father, and God, but it is our choice and our free will decision to accept that love or not.

That is my only hope for my sons – that they will live each day taking one more step, whether tiny or large, toward God and the path He has written on their hearts. If they do that, I know that they will make me prouder and happier than any dream my narrow mind could conjure.

In honor of Luke, I would like to share some verses that I read after he was born. Both stress the importance of faith.

Luke 7:2-10 – “Now a centurion had a slave who was dear to him, who was sick and at the point of death. When he heard of Jesus, he sent to him elders of the Jews, asking him to come and heal his slave. And when they came to Jesus, they besought him earnestly, saying, “He is worthy to have you do this for him, for he loves our nation, and he built us our synagogue.” And Jesus went with them. When he was not far from the house, the centurion sent friends to him, saying to him, “Lord, do not trouble yourself, for I am not worthy to have you come under my roof; therefore I did not presume to come to you. But say the word, and let my servant be healed. For I am a man set under authority, with soldiers under me: and I say to one, ‘Go,’ and he goes; and to another, ‘Come,’ and he comes; and to my slave, ‘Do this,’ and he does it.” When Jesus heard this he marveled at him, and turned and said to the multitude that followed him, “I tell you, not even in Israel have I found such faith.” And when those who had been sent returned to the house, they found the slave well.”

Luke 8:6 (8:4-8) – “And when a great crowd came together and people from town after town came to [Jesus], he said in a parable: “A sower went out to sow his seed; and as he sowed, some fell along the path, and was trodden under foot, and the birds of the air devoured it. And some fell on the rock; and as it grew up, it withered away, because it had no moisture. And some fell among thorns; and the thorns grew with it and choked it. And some fell into good soil and grew, and yielded a hundredfold.” As he said this, he called out, “He who has ears to hear, let him hear.”