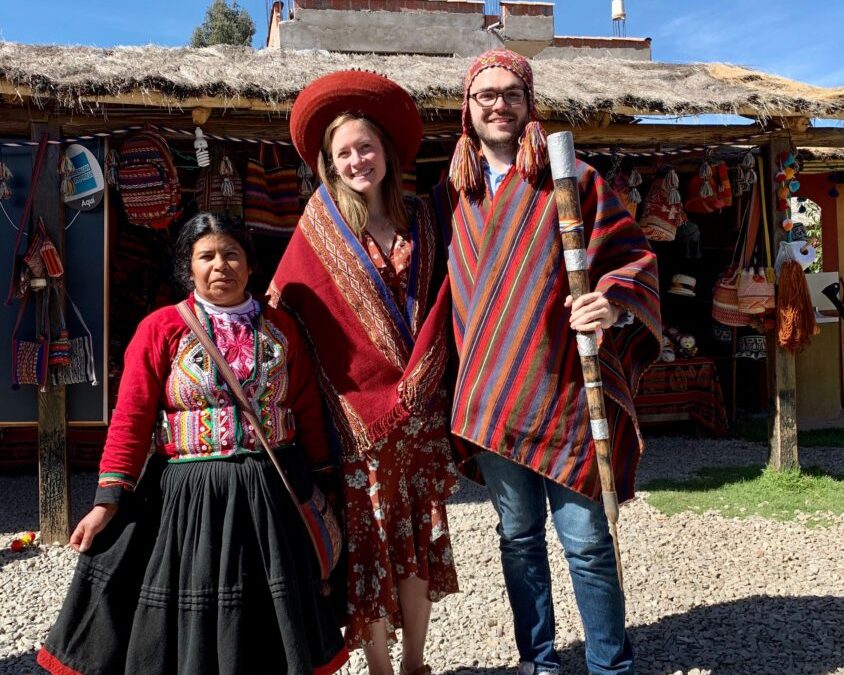 We recently returned from Cusco, after 9 days in Peru. It was a beautiful trip and we were impressed by the stunning views, delicious food, and especially the strong link between the city, its historical roots, and faith.

Cusquenos, as the city people are known, were very open to sharing their traditions with us. We learned many definitions from their native language, Quecha, observed customary buildings and structures, explored ancient agricultural practices, and noticed that at the root of every tradition we discussed, there was a connection to religion. Not a singular religion, but rather a blend of ancient Incan beliefs and modern Christianity.

At the heart of it, there are 3 levels of the world for the majority of Cusquenos who still believe in the Andean faith – the Snake, the Puma, and the Condor. The Snake represents the underworld, the Puma is life on earth, and the Condor is messenger of the heavens. Just as the Catholic Holy Trinity are three entities existing within God as one entity. The Snake, Puma and Condor represent all elements of life. While worshipped, these three entities are deferential to Viracocha, the God of all who is believed to have created the heavens and the earth, and who wandered the earth teaching humanity about life. All prayers to the three entities are made first by asking for Viracocha’s permission. During the end of ancient Incan civilization (before Spanish colonization) it was believed Inki the sun God, a close relation of Viracocha, was the main God and the father of the Inkas and the chosen people; similar to Jesus, the Messiah, being the leader of God’s people on Earth.

It is impossible to know exactly what the core Incan faith was before the Spanish conquest, as Incans kept no written logs and the Spanish went to great lengths to fully convert the Andean people to Catholicism. However, it is widely agreed that these core principles of Andean faith existed in South America before Western Catholic influence. Although the structures of these religions are not exactly the same, the overlap between the two is pretty amazing. Zoom out enough, and both Catholicism and Andean faith are structured in almost exactly the same way. A great god, a holy trinity representing his full power, and other smaller spirits (in the Catholic case, angels, prophets, martyrs and saints) used as examples of God’s power on earth.

In addition to the significance of threes, another similarity were the Incan temples which, like the churches we think of today, were beautifully adorned sacred structures. There are, of course, many churches found throughout the city as well, following the massive influence of Catholicism. These churches built by conquered Incans are filled with both Catholic and Andean iconography while built on the foundation of the great former temples. These beliefs and churches were forced upon the Andean people, but the people and their conquerors were able to blend their traditions and combine their faith. A word that was used frequently to describe it was “sincretiso” which represents the synergies and combination of the various beliefs.

A great example of this is the portrait of the Last Supper, hanging in the Church of San Francisco in Cusco (also the first Catholic church in South America). It shows the classic image of the last supper, however the center dish is Cuy, guinea pig, which is a celebratory Andean dish. Also, in the painting, Judas is referred to by Andeans as ‘Pizarro’, the Spanish conqueror who deceived and conquered the Incan people. Even with conversion, the community preserved their unique identity and were able to accept core Christian beliefs while upholding their heritage.

We found this synergy of beliefs fascinating and were also impressed with the other combinations of traditionalism and modernism across production, processes, food, dress, language, and countless other customs. We loved Cusco, and highly recommend a trip if you’re looking for a culturally rich and exciting destination to travel to.