Hope for the New Year 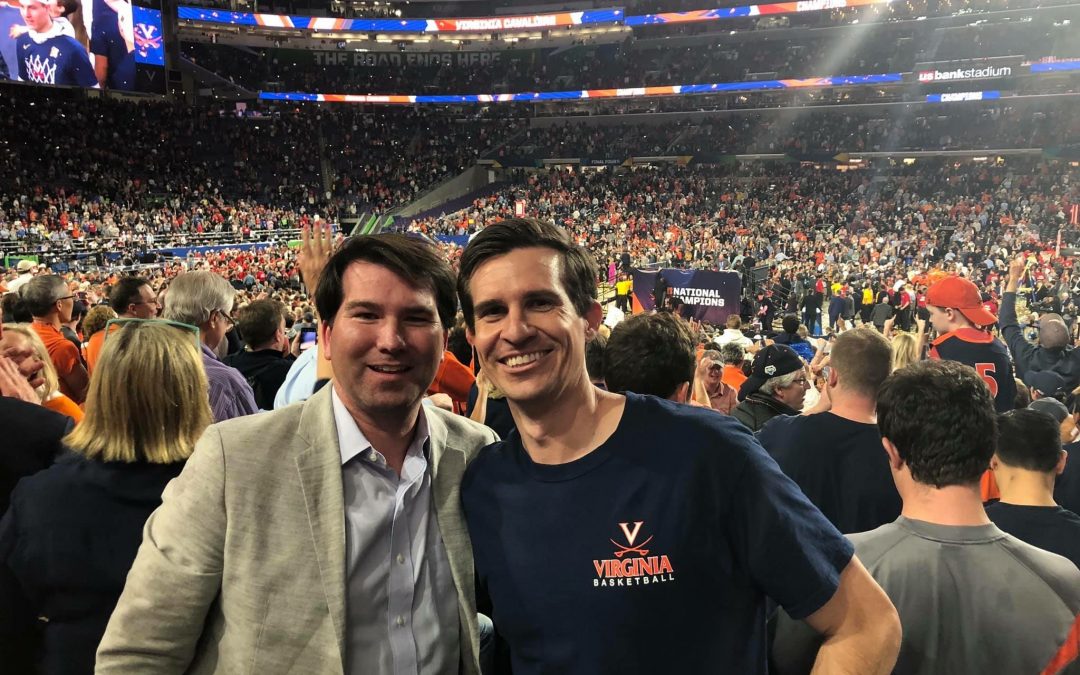 Pictured: Will (on right) and his friend DJ at the National Championship

It is the hope of a New Year! If I am to be honest, that is a strangely difficult phrase for me to say. It is not that I am without hope. Rather, I find myself so filled with gratitude for the amazing year that 2019 was. Forgive me for getting personal, but 2019 truly exceeded my wildest possible dreams as I lay sleeping while the ball was dropping to welcome in 2019.

For starters, God blessed me with my third child, Luke. He is a wonderful baby with the biggest, gummiest smile you will ever see. My wife and I celebrated our ten-year anniversary only two weeks before his arrival. I began a new job, which I love, and which allows me to spend all my days sharing my love of the Lord with others. I’ve received the joyful news that long-time friends and family are expecting or have welcomed new life. All of this is before I even get to the year the University of Virginia had in sports!

While I may hope for greater things in 2020 in some aspects of my life, it would be hard to imagine a better sports year for UVA. The men’s soccer team won the ACC title and went to the National Championship game, only to lose on Penalty Kicks. The women’s soccer team had a dominant year, won the ACC, and was the top team entering the tournament. The men’s lacrosse team won the National Title. The football team ended its fifteen-year losing streak against rival, Virginia Tech, won the Coastal Division to play in its first ever ACC Championship Game, and played in its biggest bowl game since the early 1990s. And, then, of course, there was the men’s basketball team completing the greatest redemption story in sports history. This last one holds a special place in my heart that transcends the mere sport and provides one of the main reasons I believe 2019 is unlikely to ever be matched. Please, let me explain.

Since the 2013-2014 season, the University of Virginia men’s basketball team has had unprecedented success. This golden age just so happened to coincide with my mother’s fight with cancer and with her passing, so the two will forever be intertwined in my memory and in my heart. It’s funny how something as trivial as following a sports team can bring encouragement, even hope, in the face of cancer, in the face of death. When I would watch UVA basketball games with my mother, it seemed that at least for those two hours the inevitable outcome of mom’s illness was not forefront on our minds. Instead, what mattered most was the outcome of the game. And, in that there was hope.

And, hope we did. We flew to Greensboro to witness UVA win its first ACC Championship in my lifetime. We made trips to Charlottesville every year to watch the team play, and when my mother was taking her last breaths, again, she took a break from her cancer in order to watch her beloved Hoos beat Butler in the NCAA Tournament. Less than an hour later, she breathed her last breath with a smile on her face.

Since she passed, my heart has been tied to the team in a way that is only possible if you’ve been through what I experienced with my mom. When they blew a double-digit lead in the 2016 NCAA Tournament and missed what would have been the first Final Four in my lifetime, my heart ached. It just so happened that that loss occurred the day after my mother’s funeral, and I had convinced myself that Virginia would win it all now that my mother’s intercessions would be heard first hand. Two years later, the team was historically good, boasting the best ACC record in history. Then, there was the heartbreak of being on the wrong end of history in the NCAA Tournament when they became the first one-seed to ever lose to a sixteen-seed.

Then, 2019 happened. Coming off the worst loss in history (which felt all too familiar to me when I thought of the loss of my mom), this team clawed its way back to the top. It survived a scare in the first round against another sixteen-seed. Then, they made the Elite Eight for the first time since 2016. As I watched the team fall into what appeared to be a sure defeat with seconds remaining, those old familiar feelings of loss flooded into my heart. I sat in the stands and prayed for all the players to perform to the best of their God-given abilities, but I did not believe it mattered. When it seemed impossible for them to win, the basketball equivalent of a miracle happened. As that perfect pass from Kihei Clark came off Mamadi Diakite’s hands just before time expired and then fell through the hoop to force overtime, a different sort of miracle was happening for me.

People often talk of “hearing” God in prayer, and no one can quite explain it. There is a voice. There isn’t a voice. You can hear it, but it’s not with your ears, it’s in your heart. To be honest, I had never had such an experience before, at least nothing so powerful. And, honestly, it is a little embarrassing that I would have so much invested in something as trivial as a basketball game that God felt it most prudent to reach me there. (What can I say, He knows me) Nevertheless, what was in my heart at that moment is a message I hope to never forget.

“The Lord is kind and merciful.” The words were there, somehow as tangible as if they were written in stone. I knew, in a way, they were just as real as if they had been.

As if that experience was not enough, Virginia went on to win that game, and then finished the season with two more “miracle” wins to take home the National Title. I could spend hours trying to fully articulate what this all meant, but I think some things are better left unsaid. Rather, I will recall what Tony Bennett said after that Elite Eight game. “No one knows what this team has been through,” he said. “I do, and it’s good.” Only God knows what I have been through. And, what God has done is good, as only He is capable of doing.

Forgive me for being so self-indulgent thus far, but if you have read this far, then I am finally reaching the point. I heard recently that in reading her journals, some people were shocked to discover that Mother Teresa only had a few powerful occurrences of God’s presence and voice in her life, and they almost all happened when she was very young in the faith. She spent much of her life, as she was dutifully serving the Lord, trying to reflect back to and remember those powerful moments, those miracles in her life. I believe 2019 will be a year I spend much, if not all, of the rest of my life trying to remember. It was a year that in retrospect I can see so clearly God’s providence in my life. It also was a time when He reached out to me, a poor, wounded soul, and offered me the gift of comfort and hope that only a Father that knew His son could give.

Perhaps (and hopefully), as you have read this, you have been reminded of a “miracle” in your life. Maybe it happened this year. Maybe, like with Mother Teresa, it happened long ago. But, I would venture to say that many of you have had something happen in your lives that made you fully aware of and immersed in the reality of God, if only for a moment. Cherish that moment. Remember it. In this New Year, and always, let it lead you through the darkness as the guiding light God meant it to be for your journey.

If you haven’t experienced such a miracle (and even if you have), then look no further than the miracle we celebrate every Christmas. Jesus was born of a virgin and God became man. The Creator of the universe; the all-powerful, ever-present, all-knowing Being that holds all of Creation in existence chose to come into this world, not as a mighty ruler in a wealthy, powerful, or famous family. Instead, in His humility, he was born in a barn and entered the world as a poor, helpless baby in a place where no one had room for Him or His family in their homes. He did this, not to transcend to earthly power, fame, riches, or glory. Rather, He did so to teach us humility. He did so to teach us the love of family. More specifically, he did so to show us the love of a Father that would go to any extreme to have a relationship with His children. He did so to show that “No one has greater love than this, to lay down one’s life for one’s friends.” (John 15:13) He did so to be our friend … for all eternity. It was not just to be friends with the holy, or the deserving, or the powerful, or the wealthy, or the smart, or the you-name-it. He did so to be your friend, just as you are, even though you have sinned and are likely to sin again. He did so to show forgiveness and reconciliation. He did so, because as Psalm 103 says, “The Lord is kind and merciful.” May His tender kindness and mercy lead you to a richer relationship with and appreciation of Him in 2020 and in years to come, as it did for me in 2019.

“The Lord is kind and merciful,” and in that there is hope.