How Much Is Enough? What is God calling us to? 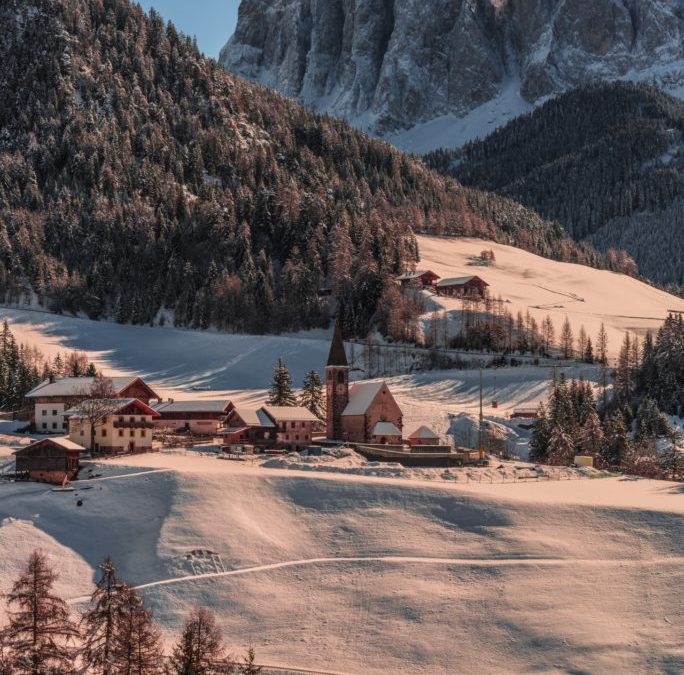 During the holidays, I was traveling with family, so I happened to attend a different church. It was snowing when we arrived. We crossed a short wooden bridge over a small creek and were met by a colorfully lit nativity and tens of lit spruce trees rooted in but towering over the snow. The church was nothing more than a modest cabin made with raw wood, and as astounded as I was by its physical beauty, I was taken even more by the service.

The priest delivered a wonderful message, and he said something that I have not been able to forget since. It is a dilemma that I have often pondered. One that I’ve shied away from, ignored, even feared. It is something I’ve discussed in my Bible study. It is even a topic a friend of mine broached in an email he sent me the Monday after. Frankly, it is maybe the most important thing a Christian can consider in this life.

The priest was talking about spending time with God, and he related a personal story from when he was in the eighth grade. He said that someone had asked him how much of his time he devoted to God, to prayer. He said at the time he spoke on the phone incessantly with his girlfriend, so he reasoned that he could devote at least some of his time to his relationship with God. It started by praying one decade of the rosary. For those unfamiliar with what that means, it means praying ten short prayers while pondering one of the mysteries of God. He said before long he timed himself and discovered that it only took him three minutes. So, he prayed two decades, which was six minutes. Then, three, nine minutes. And finally, he prayed an entire rosary every day and that was the beginning of the deep and loving relationship he developed with God that led him to becoming a priest.

What he said next was what really struck me, because it was so relatable. I know it is true in my life, and it is something that I regret I have turned away from far too often. He said, “As much as you give to God, He will always ask for more, and that’s terrifying.” Now, he immediately followed that sentence by saying, “but the more you give, the more He fills you with joy,” which of course, is true, but it is a lesson learned after the fact. It is a lesson learned by putting faith to the test, to being willing to follow God and His call even to the ends of the earth. And in order to do so, you have to face that proposition of leaving behind the familiar, the known, the comfortable, and walking in faith, even when we have no idea where that path will lead.

I think a fitting example would be Abraham, when after being unable to have a child with his wife for the majority of his life; God finally blessed him with Isaac, only to ask him to sacrifice the son he had been praying to have for his entire adult life. Ultimately, after Abraham showed he was willing to give what was most precious to him for the sake of God, God provided a ram to replace Isaac on the sacrificial altar. God asked no one except for Himself to make such a sacrifice, but He does ask us to make our own sacrifices to show our love for Him and those around us, especially the poor.

Personally, I know I have struggled with this. I look at all my blessings, and I think, “well, couldn’t I give that up? Couldn’t I do just a little bit more? Couldn’t I give just a little more? Couldn’t I take a little less?” And, of course, the answer is always yes, and it likely will and always would be yes no matter how much I gave. I could give everything away. Sell everything and give it to the poor, but surely that could not be what Jesus would recommend, would it?

16 Then someone came to him and said, “Teacher, what good deed must I do to have eternal life?” 17 And he said to him, “Why do you ask me about what is good? There is only one who is good. If you wish to enter into life, keep the commandments.” 18 He said to him, “Which ones?” And Jesus said, “You shall not murder; You shall not commit adultery; You shall not steal; You shall not bear false witness; 19 Honor your father and mother; also, You shall love your neighbor as yourself.” 20 The young man said to him, “I have kept all these; what do I still lack?” 21 Jesus said to him, “If you wish to be perfect, go, sell your possessions, and give the money to the poor, and you will have treasure in heaven; then come, follow me.” 22 When the young man heard this word, he went away grieving, for he had many possessions. 23 Then Jesus said to his disciples, “Truly I tell you, it will be hard for a rich person to enter the kingdom of heaven. 24 Again I tell you, it is easier for a camel to go through the eye of a needle than for someone who is rich to enter the kingdom of God.” 25 When the disciples heard this, they were greatly astounded and said, “Then who can be saved?” 26 But Jesus looked at them and said, “For mortals it is impossible, but for God all things are possible.”27 Then Peter said in reply, “Look, we have left everything and followed you. What then will we have?” 28 Jesus said to them, “Truly I tell you, at the renewal of all things, when the Son of Man is seated on the throne of his glory, you who have followed me will also sit on twelve thrones, judging the twelve tribes of Israel. 29 And everyone who has left houses or brothers or sisters or father or mother or children or fields, for my name’s sake, will receive a hundredfold, and will inherit eternal life. 30 But many who are first will be last, and the last will be first. (Matthew 19:16-30)

Well, it turns out Jesus does say to sell everything and give it to the poor.  While this is not meant strictly in a literal sense, Jesus’s teaching is still unambiguous. If we want to live in a loving relationship with our Lord, we need to serve those in need (Matthew 25:40), to give of our time, talents, and treasure so as to bless those around us, and Jesus does not put a limit on it. I think that is where the fear can come in.

Taking that first step away from a worldly life and toward living a life of faith is akin to being on a boat in the middle of the ocean and diving off to swim in a direction that will hopefully bring you to shore. The boat is safe. The boat is known. The boat is stable. But (and it is a significant “but”) the boat is not eternal, and eventually a storm will come and that stability, that safety, and that known entity will be rocked and sunk.

Of course, the monumental difference between my example and diving into a faith in Christ is that in Christ we are not swimming alone in the middle of the ocean, because if we were, we would surely drown. Rather, God greets us with graces and His Holy Spirit to guide us and sustain us. So, in making that choice, we ultimately find there was not reason to be terrified. There never was a true reason to worry, but that is an assurance we only learn in retrospect, and it does not remove the fear of the unknown we all must face when making that decision of whether or not to follow Him and to follow Him wherever He leads us. In other words, it requires faith that can move mountains, such as the mountains of our own spiritual inertia, in order to overcome.

So, what is the answer? How far must we go? How much should we give? Do we all need to sell everything and give it to the poor? Truthfully, I don’t know. I don’t know for myself, so I certainly will not presume to think I know for you. I think this is a question we all must face and readdress frequently throughout our lives. How much of the time, talents, and treasure that God blessed us with do we freely give to show how much we love Him? How much of ourselves do we give, and how do we give of ourselves in our own unique way, in the way God intends us to give so as to be a blessing to those around us? Obviously, we all have responsibilities, especially if we have a family or maybe if we own a business or have people counting on our work, so giving away everything isn’t necessarily the answer for everyone. However, we all can have a heart of giving, a heart oriented after God’s heart who gave us everything we have as a gift with no expectation of return. It is in keeping that heart rooted in God’s love that we are able to truly follow Him, even to places unknown, even to places we never expected, even when that first step is terrifying, because in Christ’s love, we know we find peace, we find strength, and we find eternal life.