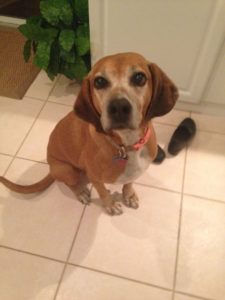 Last week was a trial, of sorts, for me. It began on a high note, with my wife and I celebrating an early anniversary. We had received a free night’s stay at a local hotel, so we spent Saturday relaxing in the hotel pool before coming home to our full-time job of raising two boys. It was then that everything began.

The babysitter mentioned that she was worried about Red, our dog, and her concerns were apparent in his demeanor. Red was sluggish, and the right side of his face was drooping as if it had no feeling. I took him to the emergency veterinarian, and four or five hours later we still had no answers. Monday he seemed to lose sensation in his right leg, too, and my wife took him to our regular vet, who said it appeared he suffered a stroke or neurological injury. There was not much that could be done, but he prescribed some steroid-strength anti-inflammatories and an anti-biotic as a “shot in the dark.” It appeared our dog was dying.

By Tuesday, I had to carry Red outside so he could perform his bodily functions, which we were thankful he was even still able to do. He bayed like a wounded hound dog when I lifted him. By the evening, I came down with a severe cold. When I got home from work late, I not only had a sore throat and runny nose, but also fever, chills, and body aches. Amber was upset because of our dog and did not have the energy to handle two energetic young boys on her own, but I apologized and told her that that was exactly what she would have to do. While I was at it, I went ahead and apologized that our anniversary the next day would likely be our worst yet.

After leaving to get some medicine for myself, I returned home and faced a choice. Amber was putting our oldest to bed, and our kitchen and living room were clear and quiet. Dishes were piled in the sink from the dinner Amber made our family, and the wreckage in the path our two year-old tornado had torn through the living room still lay strewn across the couch and floor. I had a choice. I could go curl up on the couch and be sick. Or, I could be a good husband.

It was rare for me to look at something as mundane as doing dishes and picking up the house with an eternal perspective, but that was exactly what I did. I figured a month from now, I would not remember my cold, but the effects of serving my wife, especially in her time of needing emotional support, would dictate the type of marriage we would have. Jesus said, “the Son of Man came not to be served but to serve, and to give His life a ransom for many.” (Matthew 20:28) This was a small way I could be more like Jesus, so I prayed for the strength to complete the task, though I doubted I had it, and began washing dishes.

To my surprise, I was able to wash all the dishes and pick up the entire living room (without collapsing) before my wife finished putting our two children to sleep. She came and sat on the couch next to me and our sick dog, and she was visibly upset. So, I decided not to stop there. I turned to Amber and asked if she would like to pray for our dog. She agreed, so I prayed that God show His mercy on our dog, and if it were in His plan, that He heal him. If that were not in His plan, I prayed that He shower Amber and I with His grace and mercy and that He comfort us through the difficult time of losing our dog.

That was it. I could not have prayed more than a minute, and then Amber and I went about our evening. I went to bed early even though I could not fall asleep because of my congestion. I prayed again for our dog and for Amber in a similar manner, and I eventually got some restless sleep.

The next day was our anniversary, and with full anticipation that it would be one of our worst, I decided to try to make the most of it. I took vitamins and Tylenol and felt as close to normal as I could, and by the end of the day, I was feeling much better. I returned home, and our dog seemed to be doing a little better, which lifted my wife’s spirits. We had soup at home with our boys for dinner, and after they went to sleep, we had tea while we watched a movie. All in all, it will not go down as one of the best anniversaries we ever shared, but it was not a disaster either. God spared us that.

And, perhaps to prove a point, God spared more than that. After seeming paralyzed on his entire right side, losing interest in food and water, and being unable to even walk outside to relieve himself, our old hound dog seems completely back to normal. Seeing him today, you would not guess that just a week ago we thought he was dying. Perhaps the shot in the dark medication worked, or maybe it was not a stroke but some other sort of temporary neurotoxin, like from a Bufo toad or snake bite, or maybe it is a temporary uptick and our dog will go downhill again when he finishes his medicine. Regardless, I do know that God heard our prayers last week, and He answered.

I hope this small anecdote will encourage you with whatever struggles you are facing in your life, and that it will also serve to remind you of God’s promise. “Is there anyone among you who, if your child asks for bread, will give a stone? Or if the child asks for a fish, will give a snake? If you then, who are evil, know how to give good gifts to your children, how much more will your Father in heaven give good things to those who ask him!” (Matthew 7:9-11)