Why don’t we listen? 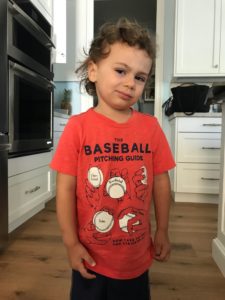 I’m typing to you amidst hour-two of my two-year-old refusing to chew and swallow the food in his mouth. My wife and I have tried everything. We’ve enticed him with promises of chocolate, books, and playtime after he finishes the food in his mouth, we’ve threatened to take away comforts and privileges, and this now marks a full hour that he’s been standing in the corner because he won’t swallow the food in his mouth. Despite our best efforts to reason with him or use our parental authority, we cannot bend his free will and force him to do what he clearly does not want to do. And, the funny thing is the food he is refusing to eat is a ripe strawberry. Not only is it a sweet treat, but even if he doesn’t like the taste of strawberries, a simple three seconds of chewing and swallowing will swiftly end his torment and bring him rewards in abundance.

I write this long preface to say isn’t this true of all of us in our relationships with God? He has revealed His Divine plan, His Divine love, mercy, and forgiveness, and so often we refuse it like my two-year-old gagging on sweet strawberries. Why is it that so often, when given the option to follow God and His word, we choke and simply say, “no?”

Of course, this is nothing new. Jesus, after stating the seven woes of the Pharisees, said, “Jerusalem, Jerusalem, the city that kills the prophets and stones those who are sent to it! How often have I desired to gather your children together as a hen gathers her brood under her wings, and you were not willing!” (Matthew 23:37)

Or, from the prophet Jeremiah, “I thought how I would set you among my children, and give you a pleasant land, the most beautiful heritage of all the nations. And I thought you would call me, My Father, and would not turn from following me. Instead, as a faithless wife leaves her husband, so you have been faithless to me, O house of Israel, says the Lord.” (Jeremiah 3:19:20)

It goes back as far as the first book in the Bible, to what preceded God’s covenant with Abraham and the times preceding the great flood. “The Lord saw that the wickedness of humankind was great in the earth, and that every inclination of the thoughts of their hearts was only evil continually. And the Lord was sorry that he had made humankind on the earth, and it grieved him to his heart.” (Genesis 6:5-6)

This, of course, is all linked to our original sin. It is easy to look at the millennia of evidence stacking against us and to feel none of us really has a chance. Of course we will all be like a stubborn two year-old refusing to eat what’s good for him. It’s built into our blood going back to the beginning of time. It almost seems as if we were born not to listen.

So why? Why do we do it? Why do we blatantly and repeatedly disobey a loving Father who has created an entire universe, given His only begotten Son, and who has forgiven us over and again?

Honestly, I don’t know. These questions are certainly above my pay grade, and maybe we won’t fully understand the answers until we stand in front of Him at the end of time. What I do know is that, in His mercy, God gave us a way back to Him despite it all. He gave us the gift of a perfect sacrifice in His son and the promise of compassion for a repentant heart.

My son finally swallowed his strawberries, but he was still very upset, mainly because he lost his treat, his blanket to sleep with, and his favorite breakfast tomorrow morning. But beyond those superficial things, he was upset that there was this rift between him and his parents. Surely, there is something inherent in the human mind that understands the injustice of these aforementioned grander questions, this dissonance between our actions and our reason, even in the mind of a two-year-old. So, I calmly told him that it would be a good time to apologize to his mommy, that his mommy and daddy still love him very much, and that we would try to have a better day tomorrow.